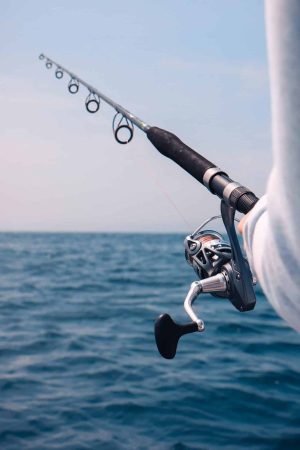 Lake Michigan is a world-renowned fishery for salmon. The type of salmon that can be found in the lake, and how to catch them, can be a little confusing for first timers, so we put together this guide to help you out.

Types of Salmon on Lake Michigan

There are four different types of salmon that can be found in Lake Michigan: Chinook, Coho, Pink, and Atlantic. The most common type of salmon caught in the lake is the Chinook, followed by the Coho. The other two types of salmon are less commonly caught, but can still be found if you know where to look.

Chinook salmon are the largest type of salmon found in Lake Michigan, and can reach weights of up to 60 pounds. They are most commonly caught in the northern part of the lake, near Door County and the Upper Peninsula. Chinook salmon can be identified by their black spots on their tail and back, and their characteristic hooked nose.

Chinook salmon are a predatory fish, and will feed on anything they can catch. They can be caught using a variety of methods, including jigs, spoons, and plugs. When fishing for Chinook salmon, it is important to use a heavy tackle, as they can be quite powerful fighters.

Coho salmon are the second most common type of salmon found in Lake Michigan, and can be identified by their silver color and red spots on their tail. They are typically smaller than Chinook salmon, reaching weights of up to 20 pounds. Coho salmon are most commonly caught in the southern part of the lake, near Chicago and Indiana.

How to Catch Salmon on Lake Michigan

When fishing for salmon on Lake Michigan, there are a number of different methods that can be used. The most popular methods include trolling, jigging, and casting.

Trolling for salmon is the most popular method of fishing for them on the lake. Trolling involves using a boat to slowly move along the surface of the water while casting lures in front of it. This method can be used to catch both Chinook and coho salmon.

When trolling for salmon, it is important to use heavy tackle, as they can be quite powerful fighters. It is also important to use lures that resemble baitfish, as salmon are more likely be to attracted to those lures. There are a variety of different lures that can be used for trolling, including spoons, plugs, and jigs.

Jigging for salmon is a popular method for catching them in the northern part of Lake Michigan. Jigging involves using a jigging rod to vertically jig a lure up and down in the water. This method can be used to catch both Chinook and Coho salmon.

When jigging for salmon, it is again important to use a heavy jigging rod and strong line, as salmon are renowned for their strength in the fight.

Casting for salmon is a popular method for catching them in the southern part of Lake Michigan. Casting involves throwing a lure out into the water and retrieving it quickly. Both Chinook and Coho salmon are attracted to this fishing method as the lures can resemble tasty insects as they hit and leave the water.

As with any open water resource, conservation efforts have been put in place to ensure the long-term sustainability of the fishery. Although the regulations can change from time-to-time, generally speaking they could include measures such as catch and release, fishing quotas, and/or closed seasons. Additionally, public organizations such as the Great Lakes Salmon Initiative work to maintain the proper balance of harvesting vs releasing these fantastic animals.

Make sure to check with the local fishing authority in your port or reputable online resource to get the latest information before embarking on your fishing trip.