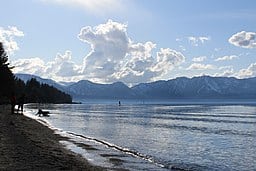 It is often thought and boasted that Minnesota has the most lakes. The fact that the state’s motto says “Land of 10,000 lakes” would indeed make one believe that this Midwest state has the most lakes of any state throughout the United States. It actually isn’t Minnesota, or Wisconsin, or Michigan, as many would have guessed that it may be one of the Great Lakes states. An important consideration in this debate is how lakes are counted. There are natural lakes, man-made lakes, reservoirs, and oxbow lakes. Actually, the majority of lakes in the United States are man-made lakes, lakes that were created by damming rivers or other water sources. Several states only have man-made lakes, such as Texas and Louisiana. California has 3,000 lakes, but only 12 are counted as being natural lakes.

Alaska is the state in the United States with the most lakes, counting over 3 million lakes, with nearly all of those lakes being natural lakes across its vast wilderness. However, Alaska only has 3,197 named natural lakes. The rest of its lakes are unnamed. The largest lake in Alaska is Lake Iliamna. The top 5 states with the most lakes are

Top 5 States With the Most Lakes

Please confirm deletion. There is no undo!